Occupation:
Spent 10 years as an amateur and professional boxer (1929-39) in the welterweight division...Worked as a boxing trainer and coach for six years (1935-41). 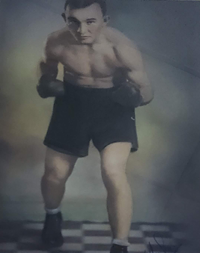 Achievements:
Yalotz had approximately 147-25 amateur and professional fights based on information in his scrapbook and personal fighting log book...Amassed a total record of 97-38-12 with a professional mark of 48-25-7...Won 30 fights by knock-out and 18 professionally...Scored 67 decisions and five technical knock-outs as an amateur and recorded 12 draws and 25 decisions as a professional...Lost a total of 38 fights, seven by draw...He lost only one fight by a knock-out (that fight was shortly after his father died and Yalotz felt he just wasn’t 100% ready to fight under the circumstances)... William fought all over Colorado, in the Cleveland, Ohio area (his brother lived in Cleveland) and had quite a few fights in California...While in California he fought in two World Champions' camps - Jackie Fields when he fought Young Cobet III and also Jimmy McLarnin when he was training to fight Young Corbet III... An article in his scrap book from the Evening Harold & Express by Sid Ziff confirmed that Bill Yalotz caught McLarnin twice with his left hand (Bill was a Southpaw) once "sat McLarnin on his seat and the other staggered him back on his heels."...Yalotz also fought at the Steel YMCA.

Related Activities:
Yalotz was also very involved with the Knights of Columbus and the American Legion working as a fighter and later as a coach and trainer to teach young fighters and help develop local boxing talent.

Personal:
Passed away in 1988 at age of 80...Inducted posthumously into the Greater Pueblo Sports Associaiton (GPSA) Hall of Fame in 2012.

GPSA "Y" By The Numbers