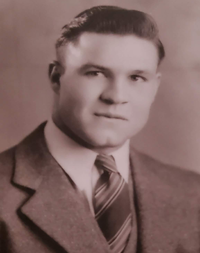 College:
Attended the University of Colorado for a year...Lettered and played one year as fullback on the Buffaloes football team (1942)...Named All Big 7 Fullback (as a Freshman) in 1942..."CU coaches said that Walt was better than Byron “Whizzer” White at the same stage of development"...Was a member of the CU baseball team, playing centerfield in 1943...Played basketball as a freshman and lettered one year.

College Achievements:
Team played in National AAU Tournament held in Denver...Beat the University of Wyoming (The NCAA Champions) in the semifinal game...Got beat in the championship game by Phillips 66... Named to the National AAU basketball team (second team).

Military:
● Joined the U.S. Marine Corps in the Fall of 1943...Played football in the service as a fullback for the El Toro Marines (1944-45)...Team got beat in the ALL SERVICE finals by the Navy Team.

Pro Football:
Played four years of pro football and was nickname "Hatchet" the way he would run through tacklers...Played fullback for the Chicago Rockets (1946-47) and Los Angeles Dons (1947-49)...His highest salary as a pro was $7,500 per year (which was very good in those days)...Has the honor of receiving a pension from the NFL that is higher per month than the amount he made when he was playing (Probably nobody in Pueblo County, that qualifies for GPSA, has this honor).

Coaching:
● Spent his entire coaching career at Centennial High School.
● Worked four years (1951-54) as an assistant football then was promoted to the Bulldogs head football coach during the 1955 season and worked four years until 1958.
● Posted a career record of 18-19-3.
● Was the head baseball and track coach for a year (1952 and 1956, respectively) and the Bulldogs basketball coach for five seasons (1952-56).

Honors:
● The Officials Association Awarded Walt an Honorary Life Time Membership in the following four sports: A plaque for football, baseball and basketball officiating and a clock for wrestling officiating.
● Enshrined into the Colorado Sports Hall of Fame in Feb. 1994.

Occupation:
Professional football player and Hired by District #60 as a Teacher/Coach.

Personal:
Lives in Pueblo with his wife, Rosemary Harsh...Nickname "Ki" (for Kaiser) Clay.