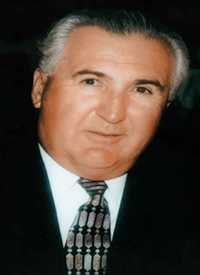 Ron OreskovichAthletic Achievements:
Oreskovich began his sports career on the dirt sports fields of St. Marys Catholic grade school, in Pueblo, where he played football, basketball and softball from 1956 -57. In 1958 he attended Keating Jr. High playing both football and basketball. In 1959, he was the starting center for the Komanches city championship basketball team.

Ron attended Pueblo Central H.S.,where he was a tight end on the Wildcats 1961 state Championship football team..."Big O" also played in the all state football game and the all city baseball game, when he was a senior. He pitched for Alibi Lounge in the Summer Softball Recreational League, and the result was two state championships.

In 1963, Oreskovich pitched for the 1st time in the Premier Softball Association (PSA), had a tryout with the Yankees and joined the US Air Force (USAF)...Ron pitched a lot in the USAF for Vandenberg Air Force Base (AFB), but was also picked up by other AFB softball teams who flew him to and from tournaments.

Ron got out of the USAF in 1967, and became a force to be reckoned with in the PSA. At about 6' 2", the big lefty could throw a fastball, riseball, drop, curveball, and a change up.

The "Big O" hung up his spikes in 1975 and went onto become a successful banker for Minnequa Bank for 30 years. He became a dedicated and prized employee for the bank and for his many clients. He rose to Vice-President at the bank and served on its Board of Directors.

Related Activities:
Ron was involved with his community in the Rotary Club, Old Timers Baseball, Preseren Glee Club, Pueblo Builders Association, Pueblo Bowling Hall of Fame, and numerous other groups, where he almost always served a term as their President. He was a finance member for St. Mary's Church, and the Diocese of Pueblo, where his financial expertise was of great benefit.

Personal:
Ron passed away in July, 2009. He is surviived by his wife, Diana and two children, Ronald M. and Kristin.