Their names are synonymous with Pueblo and Pueblo County High School wrestling and they won seven out of eight state titles in their respective weight classes.

It's why they've earned recognition by Greater Pueblo Sports Association for a great moment in Pueblo sports for 2018.

The Willits twins nearly had identical records through four seasons for the Hornets. 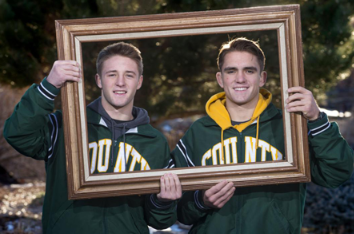 Twin brothers Grant (left) and Hunter Willits hold a picture frame and pose for a portrait outside their Pueblo County home. (CHIEFTAIN PHOTO/FILE)

"It's a good feeling," Hunter Willits said. "It makes it feel like the hard work was well worth it."

Hunter's most prestigious moment occurred February 2017 at Pepsi Center. The official raised his hand as Hunter held up the four fingers. Signifying a first for any Pueblo wrestler.

Hunter, who wrestled at 152 pounds, became Pueblo's first wrestler in history and 20th ever in Colorado to earn four state championships.

To say the moment was surreal doesn't do it justice for Hunter. It's certainly one he wishes to relive.

"I wish I could have taken it in even more than I did," Hunter Willits said. "I just remember standing there, looking around the Pepsi Center and looking at all the spectators and knowing everyone is standing up for what I've done. It was unbelievable."

The Willits brothers almost made it 8 for 8 with state titles.

Grant's sophomore year, though, on the second day of weigh-ins, he missed weight for 113-pounders.

By a tenth of a pound.

"That sucked but I'm over it now. I think it made me better overall," Grant Willits said. "It made me wrestle with a chip on my shoulder and comeback and want those extra titles even more than before. I didn't want to be one of those guys who won it once and never won it again."

Grant earned titles his junior and senior year and finished with three in four seasons.

Hunter and Grant also never lost a wrestled match during the state tournament.

"I'm proud of how events turned out at state for me every year at state and how I was able to compete on the national level as well. I had fun with it," Grant Willits said. "I was on a great team with great coaches. There was never a dull moment wrestling at Pueblo County. When it was time for business, we took care of business. It was fun."
GRANT WILLITS
FORMER PUEBLO COUNTY HIGH SCHOOL WRESTLER

Both currently wrestle at Oregon State University where they recently completed their freshmen campaigns.

Hunter finished 18-16 at 157 pounds and earned a trip to the NCAA Division I Wrestling Championships in March. Grant redshirted this season and went 6-4 at 141 pounds.

Grant said he redshirted because the Beavers had a wrestler who already filled the 141-pound slot.

"I went to some tournaments, but mainly local tournaments to get some mat time in," Grant Willits said. "It was fun. I needed to build up in 141s anyway. That was kind of the plan. Get bigger and strong and get a feel for what college wrestling was all about."

It's only a matter of time before the duo does so at the Division I level.

"I'm super proud of we accomplished," Grant Willits said. "A lot of hard work was put in. I have that one regret, which was missing weight. Other than that I have no regrets. But as I said, I've moved past that. I'm happy with what we've done."