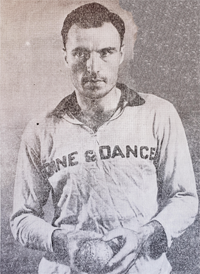 Before High School:
Played guard for the CF&I - YMCA Midgets in the 1920's.

High School:
Attended Pueblo Central H.S., graduating in 1932..Milner played basketball (guard) for the Wildcats...Also was a member of the football and tennis teams.

College:
Changed his name from Mike Milusnic to Mike Milner when he went to Western State College (WSC) in Gunnison, Colorado in 1934...Dropped out of school for a term the returned...Also played football at WSC.

Achievements:
College:
● Named captain of the Mountaineers basketball team that beat Colorado University with Byron “Whizzer” White playing for the Buffaloes (1938).
● Gunnison fans consider him one of the best defensive men to ever play for the Mountaineer five.

Related Activities:
● Played basketball as a guard for the CF&L - YMCA in 1938 and with New York Furniture out of Denver, Colorado.
● Played in the National AAU Basketball Tournament.
● Softball windmill pitcher: 6' 2" 180 lbs with good speed, change of pace, curves and control.
● In the 1930's had a right short stop and a left short stop...Did double duty, being both the manager and pitcher for the Gunnison Shell Oilers.
● Pitched for CF&I Pueblo - State Champions - CF&I (1936).
● Pitched for Shell Service Station in Gunnison, Colorado before moving to Denver (1937).
● Played for "Fats" Richardson, manager of the Denver Golden Gate Grill and his pitching beat the Pueblo C.F.& I Finishers 2-1 in State Playoff (1938).
● Voted as the best pitcher in Denver.
● Other teams pitched for: Collateral Bankers, Cook-Alperts, May Company (in May, 1940, pitched May Company to win in his last performance in Denver), and for United Airlines in Cheyenne, WY, on June 28, 1940.
● Softball teams Mike pitched for went to the National Softball Tournaments many times.
● Was a pitcher and manager for the U.S. Army softball team in 1948.
● One of seven volleyball players on Denver 'Y' Volleyball team in 1959 that won the West Central Volleyball Championship.
● Also played for the Pueblo Steel 'Y' and Omaha.

Contributions:
● Worked as a football official and served two years (1955-57) as the President of the Colorado Football Officials Association.
● On March 20, 1955, worked the NCAA Basketball Tournament in Kansas City as an official.
● One week later (March 27, 1955) he refereed in San Francisco, California (Olympic Club win against the U.S. Marines from Quantico, Virginia).
● President of Colorado Board of Basketball Officials and the Chairman of both the Basketball Committee for Colorado High School Activities Association (CHSAA) and AAU Volleyball Committee.

Occupation:
Worked as the Co-coordinator of Officials at Stanford University - which as to make sure officials at the Cardinals home games are well taken care of.

Personal:
Was married to his wife Geraldine...Passed away on August 18, 2003.