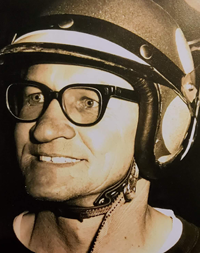 High School:
His junior and high school years at the end of World War II were unbearable and consequently he dropped out of high school.

College:
Smith went onto earn a bachelor of science degree in business management at Kansas State Unversity and played basketball for the Wildcats.

Lou Willschau was instrumental in the birth of Beacon Hill and kept fans coming for more than a decade. Lou raced stocks, super-stocks, sprints, modifieds, and midgets. When Uncle Lou retired his helmet he had repeatedly posted speed records in time trails and racing events, earned season driving honors on multiple race tracks, and had mentored dozens of car enthusiasts.

Contributions:
Lou Willschau would race anything, anywhere, any time. Sometimes he raced against his own fastest time or highest speed, sometimes against another driver. When he was behind the wheel of a car or truck he couldn't help it - it was innate. He began working on cars and motorcycles full-time, and racing motorcycles on dirt tracks on the Front Range.

He had a new outlet for his need for speed when the Pueblo Speedway, an oval dirt tract on Prairie and Northern, opened in the mid-'50s. He drove for several owners and cultivated an improbable friendship with one of his biggest fans, Don Peaker, a wealthy and nerdy geologist. Don owned hundreds of acres around Pueblo, including a nice-sized chunk north of Pueblo that had already failed to produce oil and water that Don had placed a go-cart track on to mitigate the net value of his purchase.

In was clear in the early '60s that Pueblo Raceway was becoming too small for the field of drivers, and housing for Pueblo's affluent was creeping intolerably closer to the speedway. Lou, Scotty Oldaker, and Jim Carty approached Don Peaker about financing a new race car track in place of Don's go-cart track, and Lou's old friend obliged. This was the birth of Beacon Hill Speedway. Carty built it. Lou, Oldaker, and Carty managed and promoted the track during its first year. Unhappy splitting his time between driving and the business of racing, Lou stepped out of management the next year. Oldaker became the chief judge and Carty became the sole manager while Peaker retained ownership. Lou, the track's golden driver, rarely spoke about the important role he had in Beacon Hill Speedway's beginning.

At Beacon Hill and other tracks along the Front Range he drove the legendary southern Colorado stocker #6-PESO TIJUANA TAXI 1955 Ford owned by Donnie Moore. Lou, the "piloto," dominated the race card and flashed his patented ear-to-ear smile time and time again in the trophy photo. At what was probably an "elderly" 35-40 years old he was considered the Grand 01' Man of Steel City stock car racing.

Lou's Ford vs. Chevy battles with arch-rival Ronnie McDowell were epic, pleasing the fans with bumper to bumper duels year after year. As in most stories, one character tends to wear the proverbial white hat and another the black. Lou Willschau always wore the white and the fans knew it, the track managers knew it, everyone in town knew it. More and more people attended races for the sheer excitement of watching the ongoing Willschau-McDowell dogfight. They would cheer Lou on in other races too as he was hired by other owners to drive sprint cars, midgets, modifieds, and super-modifieds.

In 1968 Peaker sold the track to Walt Pickard. In step with the changing times, Lou began droving a 1965 289-Fairlane TAXI stocker, also owned by Moore. Although the car was sponsored by Johnson Electric, he parked it in back of the Wilcoxson Buick-Cadilac-GMC dealership. In fact, if one would go by Wilcoxson's in the evenings there was a good chance that Lou and his crew (Moore, Carl Pantelo, Frank Potoker) would be working on the TAXI. Dozens of men from other pitt crews would come by to have a beer with - and be schooled by - the charismatic Uncle Lou.
In 1972 Donnie Moore left racing, and the TAXI too. Lou began driving for George Weldon who had several cars that were frequently out of commission due to wrecks on the track. While Weldon's cars were being repaired Lou drove a '71 Torino fastback late model flashing the #1, owned by Art Baca and sponsored by Hamm's Brewery. Fellow racers at Beacon Hill teased that his (stock) Torino was so wide, it barely seemed to fit across the track.

He was a true ambassador to the sport of stock car racing, and a Southern Colorado fan favorite by one and all. He worked as a custodian at South High School and would "hold court" during lunch talking with car­crazy kids about all things automotive in general, and stock car racing in particular. When Lou became a mechanic for Pueblo School District 60 he designed and made special tools in his personal time to work on busses. In turn, his supervisor met his request to drive the special needs bus a few hours each day. When he died, all his custom tools were gifted to the school district.
Lou wasn't just a race car driver. He knew how to make the cars go fast and how to make them last. He knew gear ratios, transmissions, engines, and was particularly good at setting up a chassis - something plenty of other car owners asked for his help with and he gave it readily. He particularly liked helping less experienced drivers with their cars in order to level the playing field.

He tried to level the field off the track too. He mentored a few rough-neck teenage boys and taught them a vocation at home in his garage. Ear' "Butch" Stauffer was particularly grateful to adopt Lou as his dad and managed to stay out of trouble with Lou's help. Lou also frequently collected gently-used clothes, food and home goods to take to some of the families on his bus route. He took a special interest in Charlie, a disabled boy whose family lived in a house with a dirt floor, to make sure he learned how to drive and helped him fix-up and modify a car they found at a dump for Charlie's special needs.

Quote:
"Lou had a personality that was comforting to everyone. If something was going wrong, all had to do was show up and it all seemed to come together. He knew how to make you feel good. He did was worry good to about the other helping drivers the and competition; many times he was helped more them interested with in advice helping about others. handling That's their just cars. how He he not was." -- Charles Larsen Jr.

Personal:
Willschau was the son of immigrant German parents... was a resident of Pueblo for 55 years...Lou passed away on February 20, 1985.