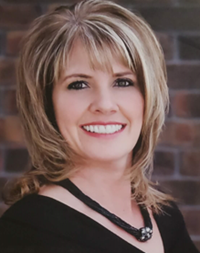 High School:
Attended Pueblo Central H.S., graduating in 1990...Lettered three years (1986, 88-89) on the Wildcats gymnastic team...Three-time (1987-89) Colorado High School Coaches Association All-State Gymnast...Recipient of the 1988 Southern Colorado Sports Incorporated 7th Annual "Mexican-American Sports Award"...During the 1987-88 season, Kendra was the High School State vault, beam, floor exercise and All-Around Champion, and finished 4th Place on the bars...The following season (1989-90) she took 1st Place on the vault, bars, beam, floor, and All Around at the Hornet Invitational, finished 1st Place All-Around in every league meet...Kendra was the High School District vault, floor and All-Around Champion and took 2nd Place on the bars and 3rd Place on the beam in leading the Wildcats to the team championship...Also during that same season, Drury tied for 1st Place vault and bars Champion, 2nd Place beam Champion, 1st Place floor and All-Around State Champion, while helping the team to a 3rd place showing at the State meet. Kendra was coached by Daniel Musso and Allegra Giltner.

College:
Went to the University of Arizona...Two-year scholarship gymnast and letter winner for the Wildcats (1990-92)... Competed in the 1990-91 PAC 10 Gymnastics Championships under coach Terra Sisson.

Coaching:
Spent two summers (1987-89) as a gymnastic coach for parks and recreational sports...Worked since 1994 as a gymnastics coach at Nogare’s Gymnastics Academy (20 + years)...Kendra spent time coaching for a year (1997-98) at the YMCA in Hutchison, KS...Drury came home to be a volunteer gymnastics coach at her H.S. (Pueblo Central) for two years (2005-2006) before taking the reins of the program the following three seasons (2007-09).

Contributions:
Kendra as been the co-owner of Nogare’s Gymnastics Academy since 1994 (20+ years)...She has sponsored gymnastics since 2001 (13+ years) at Pueblo Central H.S and has been a teach in the Pueblo City schools for 9+ years (since 2004)...Part of a committee to bring back High School Gymnastics to Pueblo...Nogare’s Gymnastics Sponsor of self-funded Central Gymnastics High School Program.

Related Activities:
Nogare’s Gymnastics Academy Co-owner and Coach for the past 20 years and is still coaching children 18 months to 18 years in gymnastics and cheerleading and continuing to help these athletes earn state and national titles.

Occupation:
Teacher for the Pueblo City Schools, as a Kindergarten teacher.

Personal:
Lives in Pueblo with her husband, Russell Drury.