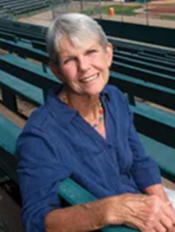 High School:
Attended Pueblo Catholic High, graduating in 1966...Served as the sports statistician for three years (1964-66)...Was a member of the Student Government Pueblo Catholic in 1962, and was given the Outstanding Senior Award (1966).

College:
Went to Southern Colorado State College (SCSC), and graduated in 1969...Was a dual major at SCSC, studying Graphics and Mass Communication.

Achievements:
● Member of the Runyon Field Board of Directors and served as its Treasurer.
● Served on the CHSAA Hall of Fame Founding Committee and the Colorado Press Association.
● Elected to be the Chairman for the 1996 Colorado Sports Hall of Fame.
● Regional President of the Pueblo Newspaper Guild (1996-97).
● Received the South Central League Media Award (1989).
● Treasurer of the Southern Colorado Press Club.
● Member of School District #60 R&R Committee and the Strategic Planning Committee.

Personal:
Lived in Pueblo with her husband, Jack Hildner...Proud mom of twin sons Matt and Thad...Passed away Dec. 22, 2020.