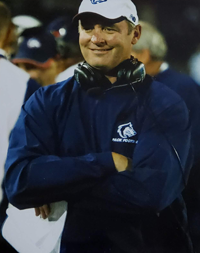 Achievements:
Football:
John Wristen returned to Pueblo in 2008 to take on the task of building CSU-Pueblo's football team. In a few short years he managed to take his team to a National Championship in 2014. It was only the second national championship won by the athletics program at CSU-Pueblo. The first being the NJCAA National Championship won by the legendary Coach Harry Simmons and Pueblo Junior College in 1961.

Wristen returned to Pueblo after coaching the previous 17 years in the NCAA Division I ranks at the University of Colorado, Northwestern University and UCLA...Durring the 2006 season, Wristen served as the special teams and tight ends coach at UCLA.

Prior to UCLA, he served his second of two stints at CU from 1999-2006. He helped guide the Buffaloes to four Big 12 North Division Championships and the 2001 Big 12 Title. He coached the tight ends, kickoff and punt teams, and was given the additional responsibility of recruiting coordinator in 2003.

From 1991-1999, Wristen served as the running back, kickoff return and punt team coach at Northwestern University. The Wildcats won back-to-back Big 10 Titles in 1995 and 1996 during Wristen’s tenure, and he coached Heisman Trophy finalist Darnell Autry. Northwestern received the 1997 NCAA Graduation Award for graduating 100 percent of its undergraduate student-athletes.

Wristen’s career in Division I football started in 1990 as a graduate assistant at CU (1990 National Champions), working with the quarterbacks and running backs.

As the starting quarterback at then-University of Southern Colorado, Wristen was an honorable mention All-American quarterback, guiding USC to its only NAIA National Playoff appearance in 1983. He graduated as USC’s all-time leader in passing yards (3,283) and touchdown passes (26). In 1982, Wristen led the NAIA in passing efficiency with a 182.5 rating as a junior.

After graduating with an education degree, Wristen signed a free agent contract with the Denver Broncos. After being released from the Broncos, he worked toward a Master of Arts degree from Adams State College, which he received in 1988.

Related Activities:
Active member of the Praise Assembly of Pueblo.

Personal:
John and his wife, Rochelle, live in Pueblo with their four children: Bailey, C.T., JoVanna and Dex.