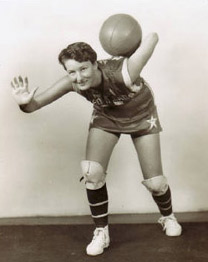 Achievements:
● Five time All-American (1954-58) for the "Red Heads" basketball team.
● Inducted into the Lindsey High School Hall of Fame in 1987.
● Received the Recipient of Recognition - Contributions to USC Athletics (1987).
● Recipient of the 1988 School District #60 Service Award for Girls Sports.
● Named in the 1993 publication "Pioneers in Sports" as a major contributor to Women's athletics as a player, coach, supporter, and administrator of Women's Athletics.
● Made outstanding contributions to sports in the State of Colorado and the Nation.
● Officer and Founder of the Intermountain Association Intercollegiate Athletics for Women (IAIAW).
● President of the Region VII IAIAW in 1968.
● Inducted into the "Naismith Memorial Basketball Hall of Fame" in Springfield, Mass.. (Sept. 2012) as a member of the "Red Heads" women's Basketball team who toured the United States playing men's teams in the 1950's.

Contributions:
● Spent 14 years as an Colorado H.S. Volleyball Official (1966-80).
● Held Basketball/Volleyball Clinics All over Colorado for 10 years (1970-80).
● Worked for nine years as USC's (now CSU-Pueblo) Women's Sports Assistant Director: Coordinator for Women's Sports and as a member of the NAIA Women's Committee (1975-84).
● Served for six years (1979-85) on the Board of Directors of the Women's Basketball Coaches Association (WBCA).
● Chairperson of the NAIA District VII Basketball Committee (1980-82).