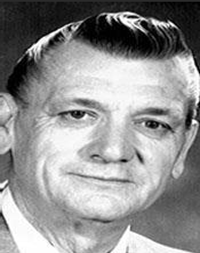 Contributions:
● Moved into education administration for the next 30+ years starting out as an Assistant Principal & Athletic Director Pueblo County H.S. for three years (1957-60).
● Spent one year as the Principal at Pleasant View Junior High (1960-61) and returned to take over the Principal duties Pueblo County H.S. for the next decade (1961-71).
● Moved to the District #70 administration building, working for three years (1971-73) as the Director of Instructions, then as the Associate Superintendent School for the next 10 years (1973-83).
● Took over the reins of the district in 1983, as the Superintendent and worked in that capacity for the next three years until 1986.
● Worked for 10 years with Colorado High School Activities Association (CHSAA), first as a six-year member of the Board of Control (1966-72), then with the Executive Committee for three years (1972-74) and finally as its President for a year (1973-74).
● As a member of CHSAA, was instrumental in getting new classifications for the schools, bring about the weight certifications for wrestlers by doctors, the formation of girl sports and equal funding as that of the boys, and the bringing of the state baseball game to Pueblo.

Quotes:
"Jerry was a former coach with a coach's drive. He reminded me of a used car salesman, a guy who wouldn't take 'No' for an answer. He 'SOLD' Pueblo County High Athletics and at the same time maintained his position as an Educator. Jerry had the leadership that was necessary in getting the community to build the County Football Stadium.”
-- as written by Dave Socier on an article about the 4 Horsemen of Pueblo County High School and describes Jerry this way.

Picture courtesy of The Pueblo Chieftain