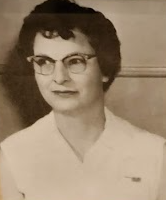 Achievements:
Bowling:
● Started bowling in 1929 at the Steel Y Bowling Lanes.
● Started bowling together with Floretta McCutcheon (1929).
● There were no organized leagues.
● Joined her first league in 1939 at the Eighth Street Bowling Alley...Six teams comprised the league.
● Went to her first tournament in Los Angeles with the State Fair team (1941).
● She started forming more leagues in 1945...The first league being the Alti-Tropicool.
● Bowled in the Alti-Tropicool for 25 years...Next was the Monday Mixed League and the Jack and Jills.
● Started helping the men organize their association (1945).
● Worked many years with the junior bowlers.
● Served as secretary for both men's and women's leagues, working with six to 16 teams.
● Represented the Pueblo Chamber of Commerce Colorado's Pride City Elk’s Wives tournament (1962).
● Bowled in Tulsa, Oklahoma in 1970, W.I.B.C. tournament in Omaha, Nebraska in 1955, W.I.B.C. tournament in 1959 in San Diego, and many tournaments in Denver.
● Bowled for Walter's Brewery for twenty years and LaTronica’s Restaurant for 25 years.
● HIGHEST SERIES was 667 with games of 255-250-162 in the Sunday Elks Mixed League.

Honors:
● Career highlight came in 1962 when she was honored with a life membership by the Women's International Bowling Congress...At that time there were only 837 members with such distinction.
Inducted in the “600” Bowling Club (1953).
● Member of the Pueblo Women's Bowling Association (PWBA) and the Colorado Women's Bowling Association (CWBA).
● The PWBA thought so much of Jones that they initiated the "Ida Jones Award" which is given annually in conjunction with the Women's City Tournament...The award is given to the woman bowler whom they feel has done much for the betterment of bowling.