High School:
Zaharias, whose birth name was Theodore Vetoyanis, went only to grammar school in Pueblo and Pueblo County for a few years...He did not attend high school in Pueblo. 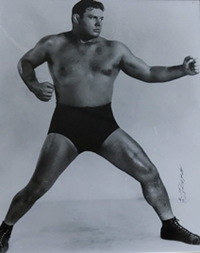 Achievements:
World Class Professional Wrestler, Promoter, and Innovator...During a seventeen year career as a world class professional wrestler, that began in 1928 when Zaharias left Pueblo for a world famous wrestling camp in Chicago and then Columbus OH...The wrestling camps made Zaharias a headliner on the wrestling circuit and he went from wrestling in tank towns to then appearing in major venues all over the world...Zaharias wrestled at 300 lbs., before packed crowds in Europe, Australia, Canada, and the U.S...He was always in contention for the world championship battling both fellow Greek Jim Londos and Lou Thesz...In 1945 George ended his active career as a headliner, married Babe Didrikson (1938) and began a career of promoting his wife and also boxing and wrestling...Zaharias along with his late wife Babe Didrikson Zaharias, and professional golfer Patty Berg (now deceased) formed the Ladies Professional Golf Association in 1949...The trio established and offered the Associated Press "Female Athlete of the Year" award in 1955, which is called the Babe Zaharias trophy and is presented each year to deserving woman athlete by the Associated Press.

GPSA "Z" By The Numbers