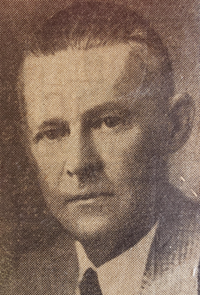 Achievements:
● A native of Illinois, he was graduated from Eureka college in that state.
● Came to Colorado he homesteaded near Haswell.
● Operated the Haswell Herald for several years, and in 1917 served one term in the state legislature as reading clerk.
● In 1922, he came to Pueblo at the urging of Mr. P.A. Gray, then manager of the Pueblo Chamber of Commerce.
● Gray suggested he join the staff of The Pueblo Chieftain and it was in the Chamber office that he met his wife Joanna, who was then Chamber of Commerce membership secretary.
● Their first date was to play golf at the Pueblo Golf and Country Club where he wrote all Sports publicity of the club..
● Two years later he became sports editor of The Chieftain and remained in that position until 1945 when he became telegraph editor.
● Played a leading role in advancing sports activities in the region and at the time of his death.
● Treasurer of the Western League Pueblo Baseball Club which he helped form.
● Ardent sports sponsor, he discovered Earl "Dutch" Clark who was Pueblo's first All-American athlete.
● One of the promoters of Clark's induction into the National Hall of Fame.
● Manager of Everett Marshall (who was the World's Heavyweight Champion Wrestler) for a short period of time.
● Accompanied Dutch Clark east when he was selected for the All-American Team.
● Brought the outstanding baseball Star Pug Griffin to Pueblo, who will be remembered by many Sports enthusiasts as manage of the Pueblo Baseball Team - then known as the Pueblo Dodgers.
● One who supported and urged the naming of the Baseball Park as “Runyon Field”.

Quotes:
“Was a great Sports Writer, known all over the country. Named Dutch Clark “The Galloping Ghost”.
-- by R.E. LeMaster

Related Activities:
● Liked fishing and golf.
● Lover of the Great outdoors
● Described as one of the most ardent sports enthusiasts of this region.

Personal:
Lived in Pueblo with his wife Joanna Zavislan...Passed away on March 14, 1949.