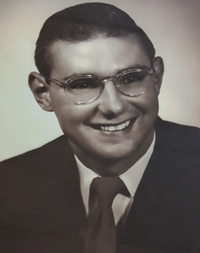 College:
Went to Colorado University from 1951-52 and lettered two (2) years, playing #2 singles on the Buffaloes tennis team...Won the 1952 Big 8 Double Title against Oklahoma University at the Big 8 conference tournament at Norman, OK...Thalhamer's best college singles match came during the 1953 season when he defeated the #2 singles player for Southern Methodist University after three (3) hours in Dallas, Texas.

After College:
Thalhamer was a player/teacher of tennis in Pueblo for close to half a century (49 years).. Everett also was a pitcher on numerous Fastpitch softball teams in the Pueblo area from 1950 to 1965 winning many tournaments and several league titles, during which he pitched ten (10) no hitters and had the most strike outs during a seven (7) inning game with fifteen (15).

Honors:
● Received the University of Colorado "Living Legends Award" presented in 2002 by the University of Colorado Alumni C Club for Achievements in Tennis (1951-52).
● Pueblo County Pueblo Teachers Association (PTA) presented a monetary award grant to the PTA Career Education Grant Program in the name of Everett Thalhamer on February 6th, 1974.
● Received the Metropolitan Lions Club "Lion of the Year" Award.

Organizations:
Charter member of the Pueblo Tennis Club in 1961.

Related Activities:
Continued playing tennis through 2013 at the age of 84 years...Stopped playing due to an ankle injury.

Personal:
Lives in Pueblo, CO with his wife Edna.