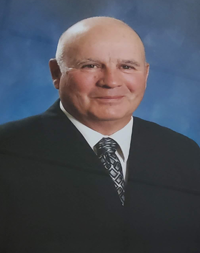 College:
Went to the University of Southern Colorado where he graduated in 1965 with a degree in Industrial Arts.

Contributions:
● Proudest contribution to the youth of Pueblo is the fact that he was and industrial arts teacher at Pueblo Central High School for 33 years (1965-1997).
● Mentor to Lee Beard, professional NHRA crew chief, Ed got Beard started in the sport of drag racing. Beard has since gone on to win two World Championships and top fuel dragster and top fuel funny car and he has also won 53 national events and 55 pole positions.
● Renck was instrumental in developing the talent of numerous players that guided Centennial High School's football team to the Class 3A State championship in 1987. Some of those players included Trooper Sanchez, Richard Reyes Jr., Brian Nava, Tim Nava, Ngalu Kalemeni and Phil Medina.
● Instrumental in helping to start the Little League baseball at Runyon Field.
● Selected as an All-Star baseball coach in 1982, 1983, 1985, and 1986 for various Runyon Field Teams.
● Selected to the Pueblo East H.S. Boys' Coaches' Classic Hall of Fame (Basketball tournament) in December 2004.
● Since 1998, has won numerous trophies and honors while at National Hot Rod shows as he is the owner of several hot rods including a 1932 and 1934 Ford Roadster.

Occupation:
Renck was a teacher for 33 years at Pueblo Central H.S.

Personal:
Lives in Pueblo with his wife, Linda Sue.