High School:
Attended Pueblo South H.S., graduating in 1979...Lettered and played three years each (1977-79) on the Colts football squad as a lineman and wrestling team as a heavyweight. 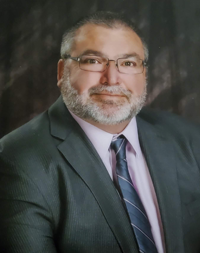 College:
Attended USC (now CSU-Pueblo) and competed in wrestling in the heavyweight division from 1983-86.

Coaching:
Spent one season as a wrestling assistant coach at USC (1990).

Contributions:
Ed has been a great leader as an athlete, coach, and a father. It was just as important to him as the assistant coach at USC to mentor several younger wrestlers to achieve all that they could as it was competing himself. To be called an All-American is a great goal. He helped several get there! Ed has a passion for Pueblo wrestling. It is a love that any wrestling fan that has spent a Saturday in the gym with Ed around will see and understands his love for the sport! It could be any kid, or even his own kids. You can hear him coaching and giving encouragement to others!

Achievements:
Pueblo wrestling is still very important to Ed. His son Hunter graduated from South two years ago. He attended every match and tournament he wrestled in. He will still always be at the big matches.Taking care of those less fortunate than ourselves is also a great passion and job Ed has. He has had a handicapped client (Ron ) for over 30 years. This is a reflection of the kind of commitment and heart Ed has for those that find victory in the daily walk of mastering life. Ed makes him feel like he is one of the family. That who he is makes a difference!

Related Activities:
Ed still helps with any tournament either high school or college that asks for help doing just about anything. He is a loyal teammate and alumni.

Personal:
Reinert has lived in Pueblo for over 50 years with his wife, Jeanette