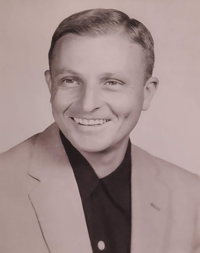 Colorado College (1946-48):
● Member of the basketball (guard) and track teams.
● Broke the Rocky Mountain A.A.U. record for the mile relay in 1948.
● Winner of the Rocky Mt. Conference mile Relay and Colo. Univ. Relays distance medley relay (1948).
● Selected as a member of the national Phi Delta Theta all-sports Honor Roll track team (1948).
● Chosen to be captain of the 1949 track team but instead accepted the position of Freshman Track Coach.
● Starting guard on the basketball team and various Pueblo City teams until sidelined with a broken leg.

Head Football Coach Vineland, CO H.S. for three years (1950-53).
Achievements:
● Finished 2nd in the Central Arkansas Valley League in 1952 with a record of 6-1-1.
● Placed four players on the All-conference offensive team and two on the defensive team.

Contributor:
● Spent six years as a teacher/coach at McClave, Vineland and Aurora H.S.(1949-55).
● Worked for six years as an Asst. Principal at Aurora H.S. (1955-61).
● Served as Director of the Division II State Wrestling Meet held in Aurora (1959).
● Named Principal at West Jr. High in Aurora for one academic year (1961-62).
● Served for seven years as Principal at Aurora High School (1962-69).
● One of the organizers and the first President of the 5A Centennial League (1968).
● Six-year member of the Colorado High School Activities Association (CHSAA) Executive Committee (1968-74) and during that time was involved in a number of major decisions concerning the operation of H.S. athletics in Colorado.
● Worked in the Central Administration as Director of Employment for one year (1970-71).
● Served one year as President of Interscholastic Activities for the CHSAA.
● Spent 20 1/2 years as Assistant Superintendent of Personal in Aurora, CO (1971-92).
● Hosted many CHSAA state level events held in Aurora including the state pentathlon meet, the Boys' Gymnastic meet and the Class "C" District Basketball Tournament.
● Served on the Speech & AAA Basketball committees of the CHSAA.
● President of the Colorado Association of School Personnel Administrators (CASPA) in 1978.
● Appointed as a Citizen Assessor by the Aurora Civil Services Commission to serve a three-year term specializing in testing, certifying, and recommending candidates for promotional positions in the Aurora police and fire departments (1993-96).

Honors:
● Received Aurora Outstanding Young Teacher Award from the Jr. Chamber of Commerce and was runner-up for same award for the State of Colorado (1959).
● Recognized as one of the Founders and Longtime Friends of the city of Aurora Recreation Department during the ceremony by Sports Illustrated selecting Aurora as the #1 Sports town in Colorado (2003).
● Named to the Pueblo Centennial High School Athletic Hall of Fame in 2005.

Speaker/Writer:
● Wrote "The Legal Status of State High School Activities Associations in the 50 States" - Unpublished doctoral dissertation, University of Denver, 1971.
● Penned "Athletic Associations Call the Tune", American School Board Journal, Feb. 1972.
● Presented "The Aurora Experiment on Effective Screening Techniques" - Jointly, at the Fourth National Personnel Conference conducted by Personnel Administrative Services, Dec. 1972.
● Wrote "How to Deal with Negative Items in the Supervision of Teacher Performance/Behavior" - prepared for presentation to all Aurora administrators and to members of the Colorado Association of School Personnel Adminstrators (1986).
● Conducted "A Study of the Educational Program of Douglas County School District Re 1" - prepared for the University of Denver Bureau of Educational Research for presentation to the Douglas County School Board of Education, 1970.

Military:
● Played guard on the Army Air Corps basketball team (1943-44).
● Served in the 15th Air Force during World War II as a Radio-gunner on a B-17 bomber stationed in Italy.
● Flew 31 combat missions - holder of the Purple Heart, The Air Medal with two Oak Leaf Clusters and five Battle Stars in the European Theatre of Operations.

Personal:
Lives in Aurora, CO with his wife Betty.. Nickname is "Gene".