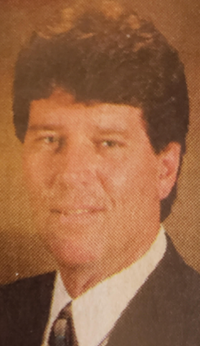 Coaching Career:
Coach basketball, football and tennis at Pueblo Central H.S., from 1974-89.
● Led the Wildcats junior Varsity football team for 12 years (1974-85), and won six District Championships while also serving as an assistant on the varsity squad for three seasons (1974-76).
● Became the head varsity football coach in 1989 and led the Wildcats to a record of 70 wins and 35 losses in six years.
● Coached the tennis teams at Pueblo Central for 13 years (1977-89), winning two District Championships under his tutelage and was named the South-Central League “Coach-of-the-Year”.

Personal:
Lives in Pueblo with his wife, Sandy.