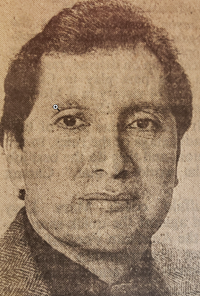 Achievements:
High School:
● Posted a record of 35 wins and 10 losses on the wrestling team.
● During sophomore season, he was getting off the school bus following football practice and was hit by a car...Fractured his leg in two areas and placing him in a cast for six months.
● Recorded a record of 16-6 during his Junior season and lost in the district semifinal 5-4 to Lynn Bickford (state champion from Rocky Ford).
● Missed a state birth his senior year despite putting up a career best 19 wins in 23 matches.

Quick Facts:
"On April 20, 1985, during a fishing trip with his son Mark at Runyon Lake two boys fell into the lake and Art jumped in and helped rescue the boys."
- Dino Aragon, Secretary of the Pueblo Wrestling Officials Association (PWOA).

Occupation:
Worked a total of total 22 years at the CF&I, starting in 1967 (10 years) in the blast furnace, then worked in the boiler shop as a crane man.

Personal:
Lives in Pueblo with his wife, Patty.