Art Gonzales, longtime supporter and education advocate of Colorado State University-Pueblo, passed away on Wednesday at the age of 89.

Gonzales and his wife, Lorraine, have been beloved members of our community and supporters of CSU-Pueblo for nearly four decades.

In a press release, the university noted that in 1997, “the Art Gonzales Baseball scholarship was endowed to allow student-athletes to complete college. For many years, Art and Lorraine funded the annual Baseball Alumni dinner hosted during homecoming weekend. The couple were instrumental in creating and financing the annual ‘Pack the Park’ event at Runyon Field, which for 15 years has brought thousands of people from the community together to celebrate the game of baseball.” 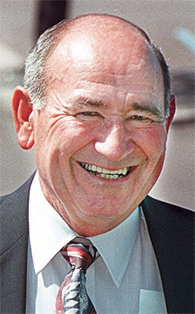 “CSU-Pueblo is grateful for the generosity of Art Gonzales, and for what both he and Lorraine have supported at our university,” said CSU-Pueblo President Timothy Mottet.

“The university is committed to honoring his legacy for future generations at CSU-Pueblo.”

Gonzales was awarded the CSU-Pueblo President’s Medallion in 2006, and in 2010 was named to the CSU-Pueblo Athletics Hall of Fame as a “special contributor.” He was a lifetime member of the “Friends of Football,” which brought back CSU-Pueblo football in 2008.

“We are losing a great friend of CSU-Pueblo athletics,” said CSU-Pueblo head baseball coach Stan Sanchez. “He was all-in for our student-athletes and wanted to put them in a position to graduate and have a good quality of life. He had a passion for student-athletes and was the spirit of our baseball program. He was down to earth, a true friend, and his loyalty was unmatched.”

Gonzales was a Sustaining Trustee of the CSU-Pueblo Foundation Board. As an acknowledgment of their numerous contributions, CSU-Pueblo named the newly built soccer and lacrosse complex at the university the Art and Lorraine Soccer/Lacrosse Stadium in 2014.

CSU-Pueblo athletics created the Art and Lorraine Perseverance Award, an annual honor for a male and female student-athletes who have overcome personal challenges, while persevering to complete a degree.

“Art gave his heart and soul to this community and we are a better place because of him,” said Todd Kelly, President/CEO of the CSU-Pueblo Foundation. “Through his generosity, Art helped hundreds of students, many of whom were first-generation or minorities, better their lives by helping them earn a degree.”

The university noted: “Through scholarships and endowments, Art’s legacy and advocacy for higher education will continue at CSU-Pueblo for many years to come.”