South state champion is now the head coach for the Colts

Don't look at the clock.

Urenda took his eyes off his opponent in the closing seconds and was taken down in a one-point loss that cost him a spot on the medal podium.

A year later, Urenda was locked in another close match at state. Tied 5-5 against returning state champion Travis Pride of Grand Junction, Urenda kept his focus squarely on his opponent.

Pride shot in on a double-leg attack and Urenda countered by launching Pride to his back with a lateral drop maneuver. His dramatic five-point move resulted in a 10-5 win. 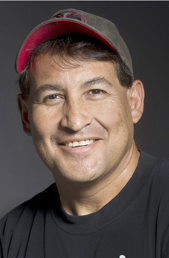 "I made a bad mistake the year before, so I knew it was all or nothing," Urenda said. "I learned I couldn't hold anything back. I was really excited to knock off the state champion. I was overcome with emotion."

Now Urenda is being honored as a member of the Greater Pueblo Sports Association's 2017 Hall of Fame class.

Urenda, 49, has remained in the sport as a highly successful coach. He was a long-time assistant coach at South under Jerry Sisneros. Urenda was an assistant to Sisneros on three Colts teams that won state titles.

"I really appreciate Sis for hiring me and helping me for the past 27 years," Urenda said. "We had a great coaching relationship and a great friendship."

Urenda succeeded the retiring Sisneros this past summer as the head coach at South. The Colts start practice under their new head coach later this week.

The South program remains strong in a city with a rich wrestling history.

"South has a long and storied tradition, going back to when Bobby Martinez was my coach," Urenda said. "South has won state three times and we've been second three times. I'm very excited about the team we have this season. These kids are going to compete and they're going to have a strong mindset."

Urenda also excelled in football and was a member of the first South team to make the state playoffs in 1985.

He played linebacker alongside Chris Haering, who went on to play collegiately at the Division I level for West Virginia. Haering is a member of the GPSA Hall of Fame.

"I tried not to push my own kids too hard," Urenda said. "I tried to guide them and direct them, and share what I knew to help them excel. They all worked hard to be successful. I'm really proud of what they all accomplished."

Urenda said the support of his parents, Robert and Sally Urenda, along with his wife's parents, Rudy and Chris Manzanares, was instrumental in a family that was constantly on the go with the hectic schedules of sports practices and competitions.

"My wife has been so amazing and supportive over the years," Urenda said. "Plus my parents and my in-laws were great with all of the help they provided. I can't thank my family enough for everything."

Urenda also called and thanked his first boss, Jack Quinn, at the Pueblo Housing Authority for allowing him to leave work early so he could make it in time for practice when he started as an assistant coach at South.

Urenda now works as a supervisor for the Colorado Department of Corrections.

Urenda initially tried out for basketball as a freshman at South, but was cut from the team. A buddy invited him to try out for wrestling and he gave it a shot.

"I just fell in love with wrestling," Urenda said. "You can't disguise hard work, especially in this sport. You reap the benefits of what you put into it."

Urenda delivers that same message to the athletes he coaches.

"Wrestling is a very tough sport, but I try to keep it interesting and fun and exciting," he said. "If kids are in the wrestling room, they are doing something positive with their lives.

"Not every kid is going to be a state champion, but they can still gain so much by competing in wrestling. It teaches them life lessons about discipline and hard work. It isn't just about winning. It's about learning a sport and being part of a team. To help kids in this sport reach their goals, no matter what it is, is very gratifying."

Urenda is grateful for being named to the GPSA Hall of Fame.

"It's really nice to be recognized," he said. "I've been very blessed and fortunate to be around a lot of great people in my life. I'm really thankful to be honored this year."