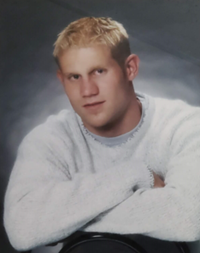 Contributions:
● Selected as captain of the Pueblo Centennial H.S. swim team his senior year (2002).
● First State swimming champion in history of Pueblo Centennial H.S.
● First State swimming champion in Pueblo in 30 years.
● Most male individual state swimming championships for Pueblo.
● After his high school career, numerous athletes from Pueblo have captured state titles and Pueblo swimming appears to have had a revitalization.
●  Growing up from 7th Grade through high school, Wolther traveled 45 minutes each way to train with the Colorado Springs Swim Team at the Olympic Training Center, but since his graduation,
the athlete participation in Pueblo appears to have increased and enjoys a much stronger club swimming scene.
●  Pueblo Centennial H.S. changed the requirements for "Mr. C" as it has always been a two-sport award. Students can now be considered if outstanding in one sport.

Personal:
Lives in Dallas, TX with his wife, Petri Brill.