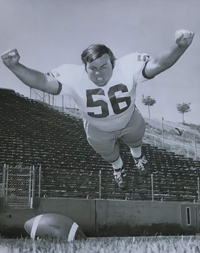 Achievements:
High School:
● Two-time All-City selection (1967-68) in football for the Eagles.
● Named to the All-State team team (1967) and nominated as the "player of the Week".
● During junior season (1968), Waters was the only Coloradoan selected to Scholastic Magazine’s All-American football team.
● Holds the school record in the discus with a toss of 55' 11".

College:
Went to Southern Colorado State College (Now CSU-Pueblo) and graduated in 1973... Played linebacker for the Indians, finishing second on the team in tackles in 1971.

Achievements:
College:
● Selected as an All-American his junior season (1972) by Football Roundup and Kickoff Magazine.

Baseball:
● Played in the City League beginning in 1959 and made the All-Star Team each year.