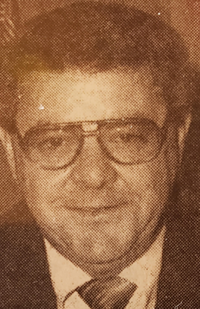 Coaching Career:
Coached both football and basketball at Pueblo Catholic H.S. and Roncalli.

Achievements:
Coaching:
● As the Shamrocks basketball coach, posted an 85-15 record and won the Southern Colorado Parochial League crown four straight years from 1964-67.
● In Roncalli's first year in the Colorado High School Activities Association (CHSAA), they got beat in the last quarter in a game against the Wheatridge Farmer (March 4, 1968).

Contributions:
● Spent 35 years in education administration.
● Begin his career as a teacher/coach for four years (1955-59) at Primero Union School, moved on to work the next three years (1960-63) in the Trinidad Public Schools.
● Moved to Pueblo where he worked at Pueblo Catholic High School from 1963-71.
● Worked for one year as both the Athletic Director and Assistant Principal at Roncalli High School in Pueblo (1971).
● Moved to the eastern plains and taking over the Principal duties for the next 20 years at La Junta High School from 1971-91.
● Member of the Executive Committee for the CHSAA for seven years (1983-90) and served as its President for two years (1987-89).
● Played a key roll on the development and implementation of "War On Drugs" program that includes a series of statewide seminars for high school and junior high students, as well as coaches and parents, to battle the war on drugs.

Quotes:
"Ozzello was as crafty as he was animated and high-spirited, one of the city’s more interesting and successful coaches."
-- Dave Socier, The Pueblo Chieftain

Occupation:
Worked as a teacher, coach and administrator