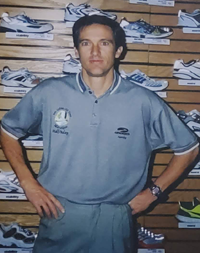 Contributor:
Cathcart is also a sponsor, donating time and monies to many running groups across Colorado...Steve has had numerous articles and TV coverage demonstrating good character, leadership and representation for Pueblo Area.

Personal:
Lives in Ft. Collins, CO with his wife, Gidget.