Considered the most decorated female swimmer in Pueblo prep history, Mary Saiz has raced competitively for the final time. But the awards haven't stopped.

The former South High School standout completed a stellar collegiate career at Colorado Mesa University, where her name shows up in seven different events on the Maverick record board.

For her accomplishments, Saiz has been named one of three great moments in Pueblo sports by the Greater Pueblo Sports Association and will be honored during the organization's annual banquet in November. 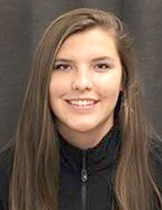 Saiz, now 22, was a five-time state champion at South and went to the University of Utah to continue her academic and swimming career. But Division I swimming in Salt Lake City didn't work out and she transferred to Division II Colorado Mesa.

Saiz,who has a year left to attain her degree in mass communications with an emphasis in public relations, reflected on her career.

"Honestly, it's crazy to think that I swam for 12 years and there was so much packed into those years," Saiz said. "How many hours, yards I've swam, the people I've met. I'm humbled."
Saiz explained what transpired when she signed at Utah out of high school.

"I decided to go to CMU and I had absolutely the best time swimming for them. I enjoyed all my years there and I still have one more year (in school) before I graduate."
Saiz admitted her ultimate goal was to qualify for the Olympic trials and she came up short.

"My main goal was the quality for the Olympic trials and actually I was pretty bummed when I realized I wasn't going to make it," Saiz said. "So I decided before my senior year that it was going to be my goal to finish my last season strong.

"It would have been awesome to go to the Olympics. But I'm grateful for what I've done."

Saiz wrapped up her competitive career in March and hasn't been in the pool until recently.

"I finished swimming in March and have been done for a while," she said. "I kind of had a mild identity crises only because I've been Mary the swimmer my whole life, an athlete. Now, I'm not that any more. It's not who I am. It's been weird having all this time figuring out what I want to do with my life."

"But I'm not training for the NCAAs any more, just staying in shape. It feels good to get back in the water."

For now, Saiz is concentrating on finishing her degree.

"I love to hike, love being outside, plus hanging out with my friends," Saiz said. 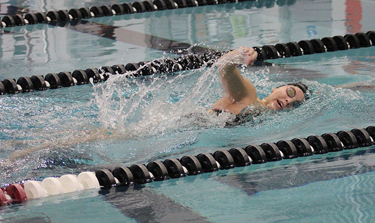