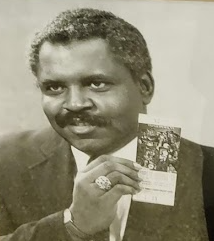 Achievements:
High School:
● Three-sport standout, playing football, basketball and track.
● Helped the Wildcats to the 1966 State Football Championship (his H.S. football coach was Ed Lesar)
● During his senior season (1967), he was named the captain of the team and earned All-City and All-State football honors.
● All-City and All-State selection in track.

College:
Went to the University of New Mexico in Albuquerque, NM.

Achievements:
Professional Football:
● Drafted in the tenth round (as an offensive tackle) by the Dallas Cowboys in 1970.
● In his rookie year with Dallas, they beat Miami in the Super Bowl.
● In 1974 he had an operation on his spine and decided to retire.

Occupation:
Sales and promotions with Clairol Inc. (His work brought him to Pueblo once a month which gives him the opportunity to renew friendships).

Personal:
His instilled inspiration to all high school athletes in Pueblo to excel in whatever they may choose...Rodney passed away on July 21, 2013.