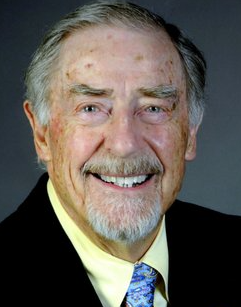 Achievements:
High School:
● Played four years (1939-42) of basketball for the Trojans.
● He started at forward on a team that was the State Champions in Class B in 1942 and State Runner-up in Class B in 1941.

College:
Went to Colorado College in Colorado Springs, CO, graduatng in 1947. Played forward on the Tigers basketball team in 1943.

Honors:
● Served in U.S. Navy as an Ensign from 1942-46.
● "Colorado Newsperson of the Year" by Colorado Press Association (1989).
● Recipient of the USC Alumni Association "Outstanding Service to the University Award" (1993).
● Pueblo Chamber of Commerce "Outstanding Citizen of the Year" award (1993).
● "Donor of the Year" National Association of University Athletic Directors (1995).
● Received the Colorado University "Living Legend" Award (1997).
● Received the "Creative Spirit Award" from the United Way (1998).
● Inducted in the Pueblo Hall of Fame for significant contributions to Pueblo's betterment (1999).
● "Outstanding Service to the Hispanic Community in Pueblo and Southern Colorado" Award from the Pueblo Hispanic Education Foundation (1999).