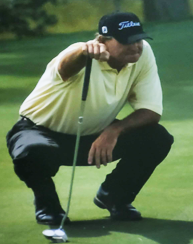 High School:
Attended Mitchell High School in Colorado Springs and graduated from there in 1972. Mike was a stellar athlete in football, basketball and golf.

College:
Attended Southern Colorado State College (which is now known as Colorado State University-Pueblo)...His talents helped the Indians men's golf team win numerous titles during his four years as well as All-American honors for himself. He was widely know as one of the most talented amateurs in Colorado golf before continuing his career as a professional.

Career Holes in one: 12
Zaremba set course records on: Shadow Hills, Walking Stick, Holly Dot, Cozumel CC Mexico...Lowest competitive round occured at the 1989 Denver Open played at Wellshire where he shot a 62.

Coaching Career:
Zaremba's efforts to organize and rally support in the form of fund raising events and donations from the golf community in and around Pueblo are the main reason the University was able to reinstate men's golf in 1988. Once reinstated, Mike took over as golf coach in 1988 and not only rebuilt the program but led it to four conference titles from 1990 through 1995 qualifying for several regional and national events.

Professional Affiliations:
Mike is a member of the PGA of America and is a class A-4 golf professional. He is currently the Director of Golf at Desert Hawk golf course in Pueblo West. Zaremba has coached golf at the collegiate level from 1988-1996. He is currently heads up the PGA Junior golf program at Desert Hawk. The first year he coached 35 juniors and the program now in it's 3rd year, has 60 junior golfers in the program The PGA junior league is highly successful in building and instructing the future golfers. Mike recently received the PGA Reach Colorado Award for recognition in his youth development. He has received a $500 grant to further his professional development in teaching.

Personal:
Mike was born in Great Falls, MT...He has been a residence of Pueblo for close to 40 years... He lives in Pueblo West, CO with his wife Susan.

GPSA "Z" By The Numbers