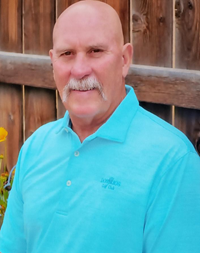 Coaching Career:
● Coached football, baseball and golf at Pueblo County...No records kept on wins/losses.
● Coached baseball under Joe Andenucio. They had some success, playing in one regional tourney game.
● Volunteered to help coach, Don Egan, with the Hornets boys and girls golf teams.

Related Activities:
● Won the senior flight championship in golf at Elmwood (2003).
● Recorded five hole-in-one's playing golf.
● Plays golf in the summer, works basketball in the winter and as a softball umpire in the Summer and Fall.

Quotes:
"We did not win many football games, mostly lack of skilled players, but never lacking heart or effort."
-- Mike Marcovecchio

"Mike Marcovecchio is a humble man, who continually strives to make those he comes in contact with have a better experience, whether that be as an official or umpire, President of the Runyon Field Board, or doing maintenance on the Hollydot Golf Course".
-- Dave Dudley

"Mike Marcovecchio has devoted his adult life to athletics and Pueblo, CO. Through his coaching, playing, officiating and participating in service organizations have proven him a vital asset to the community and young kids in Pueblo".
-- David Styduhar