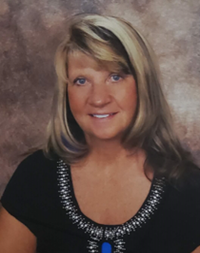 College:
Went to the University of Southern Colorado.

Athletic Achievements:
Competed in Gymnastics for 13 years (1968-81) at the Pueblo School of Gymnastics and Pueblo Centennial H.S.

Coaching:
Lanham was the head gymnastics for at Pueblo Centennial H.S. for nine years from 1981-90.

Professional Affiliations and Achievements:
She was a gymnastics official for 30 years and swimming official since 2000 (12 years) for the Colorado High School Activities Association (CHSAA).

Occupation:
Lanham has been a Teacher/Coach in School District #60 since 1993.