Larry Pickering, who led the Centennial High School boys cross-country team to a decade-long run of success unparalleled in Pueblo's sports history, has died after a lengthy battle with cancer. He was 74.

Pickering died at home Thursday, surrounded by his family.

Pickering was a two-time state 220-yard dash champion while competing for Trego County High School in WaKeeney, Kan. He went on to earn All-America honors in 1965 while competing for Fort Hays State College in Kansas. That same year, Pickering was the Missouri Valley AAU 100 and 220 champion and won conference titles in the indoor and outdoor 440. 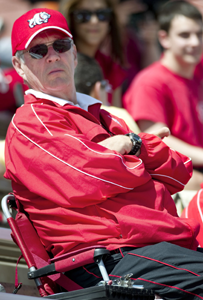 Despite that impressive resume, Pickering originally was hired by Pueblo School District 60 to be an elementary school physical education teacher in 1967. When a late opening for PE teacher and cross-country coach opened at Centennial, he jumped at the opportunity. The move turned out to be a fortuitous one for Pickering -- and Centennial.

Centennial's streak was snapped in 1974 when Arvada West won the title and Centennial and Central tied for second.

The Bulldogs failed to qualify for state in 1975, but came roaring back in 1976 to upset top-ranked East at the state meet and give Pickering a sixth state title.

Pickering's coaching style was quiet and reserved, but he got his message across.

"You didn't want to disappoint the coach," said Charles Robles, who ran for Centennial from 1970-73.

Pickering said he learned the approach from Alex Francis, his coach at Fort Hays State.

"Lots of kids tune you out when you raise your voice to them," Pickering told The Pueblo Chieftain in a 1973 story. "Maybe they get yelled at too much at home and elsewhere unnecessarily. There are a lot of good kids around today."

Pickering's leadership had a profound impact on the numerous athletes he coached. Yet it was a quiet moment with one of his cross-country teams that had an equally meaningful impact on his life.

"I had this experience at the 1972 state meet in Boulder," Pickering told The Chieftain. "Before we run, I have a huddle with the team -- try to psych the boys up. This day, I couldn't say a single thing. The kids gripped hands with me and you could feel the electricity, or emotionalism, if you want to call it that.

"That day they ran out of their minds. We took first, second and third and the kids beat opponents they hadn't beaten before. So the old tight-lipped experience started me on church work."

That discovery of faith stayed with Pickering the rest of his life and carried him and his family through his courageous battle against lung cancer.

Dennis Trujillo, one of Centennial's greatest runners who went on to a storied career at the U.S. Military Academy at West Point, N.Y., said Pickering had an enormous impact on his life.

"Coach taught us goals are important, but so are values -- kindness, humility, integrity, joy," Trujillo wrote from his home in South Korea. "Those values are more important than medals or shiny trophies. None of us would be who we are without his benevolent mentoring."

"Larry was one of the first to call me when I got to Central," Falletta said. "He told me that if there was anything I needed, to call him."

Tim Mondragon, who worked with and later succeeded Pickering at Centennial, praised Pickering as a coach and as a person.

"You couldn't ask for a better man to work for," Mondragon said. "Everything he did was awesome. He was a great person. Great with the kids."

Mondragon said Pickering treated every athlete the same, whether they were a state champ or someone just trying out the sport for fun.

"He treated them all with respect. He was concerned about them," Mondragon said. "He realized life goes on after cross-country."

"Lots of kids tune you out when you raise your voice to them. Maybe they get yelled at too much at home or elsewhere unnecessarily. There are lots of good kids around today."
-- Larry Pickering on his coaching style:

Pickering is survived by Karen, his wife of 51 years; daughters Kelly and Kim; and grandchildren.