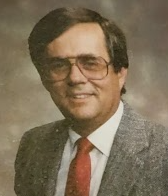 High School:
Attended Trego County H.S., in WaKeeney, Kansas where he graduated in 1962.

Achievements:
High School:
Specialized in running the dash events on the track team where he earned four varsity letters in four years.

Achievements:
College:
● Earned NAIA All-American honors in track (outdoors) in 1965.
● Member of the mile relay teams that finished second and sixth in the nation, respectively at the NAIA National outdoor and indoor meets in 1965.
● Missouri Valley AAU champion in the 100 and 220 yard dash events as well as the League (CIC) Champion in 440 yard dash (both indoor and outdoor) in 1965.

Coaching Career:
● Head cross country coach at Pueblo Centennial H.S. for eight years (1967-75).
● Also served as an assistant coach on the Bulldogs track team for two seasons (1968-69) before taking the reins of the program in 1970.

Track Athlete's who excelled under Pickering at Pueblo Centennial H.S.:

GPSA "P" By The Numbers