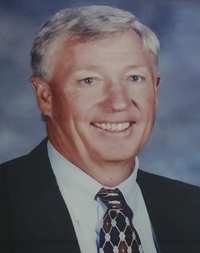 High School:
Attended Pueblo South H.S., graduating in 1962...Played three season (1959-62) for the Colts football team as a tackle/end and as a forward/post player on the basketball team....Member of the baseball squad for two years (1961-62) playing in the outfield and behind the plate as a catcher...Competed high jump on the track team for a season (1960).

College:
Went to Pueblo Junior College (PJC) for two seasons (1962-64) to play basketball (forward/post) then transferred to Southern Colorado State College where was a member of the Indians basketball squad and played the same position as he did at PJC before graduating in 1966.

After College:
Competed in basketball as a guard for the Armory and many other teams for four years (1954-57) and competed for 14 years in numerous city leagues and tournaments...Had a passion for recreational tennis and softball...Played doubles/mixed teams for 28 years and four seasons (1954-57) of softball during the summer at any position.