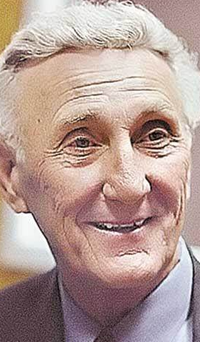 College:
Went to Penn State University in Edinboro, Pennsylvania and graduated in 1959...Played four years on the football team as a running back (1956-59).

Coaching Career:
● Begin his coaching career as an assistant football coach for three years (1960-62) at Grant H.S. in VanNuys, Calif.
● Moved on to become the an assistant baseball coach (1960-62) and the head football coach at Chatsworth H.S. in Chatsworth, Calif (1963-65).
● Made his way to Colorado and was hired as the offensive coordinator of the football team at Pueblo County H.S. (PCHS) for three seasons (1966-69) before taking the head coaching duties for the following four seasons (1969-72).
● He was also the Hornets junior varsity wrestling coach for five years (1966-70) and an assistant track coach for three seasons (1969-71).
● Concluded his coaching career, spending three years as an offensive coordinator for the Pueblo Classics from 1991-93.

Personal:
Lives in Pueblo, Colorado with his wife, Patricia... At the time of his nomination, 11 individuals wrote letters of recommendation.