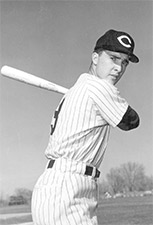 Achievements:
College:
● Played shortstop at TSC and was the teams' top hitter for a year (1960-61) earning him kudos to the All Empire Conference team.
● Played three seasons at UNC in the infield (2nd base/shortstop/3rd base) from 1962-64.
● Earned All-Rocky Mountain Conference honors as an infielder (3rd base).
● Two-time All District 7 (2nd base/shortstop).
● Holds two school records at UNC: Number of hits in one game (6) and longest hitting streak (20 games)...Was UNC's top hitter at .393 BA.

Honors:
● Four-time selection - "Who’s Who Among American Teachers".
● Inducted into the University of Northern Colorado Hall of Fame (2008).
● Known as "Have Bat will Travel" in his later years.
● Has five baseball World Championship rings (2012).

Quotes:
"I was shocked how well Joe played and I was even more shocked when I found what he had gone through", he didn’t tell anybody he had Guillain-Barré Syndrome. "He's not the type of person who wants sympathy. He’s just a remarkable person and he has a lot of guts and determination."
-- Chicago teammate Mickey Alpert speechless.

Personal:
Lives in Pueblo with his wife, June.