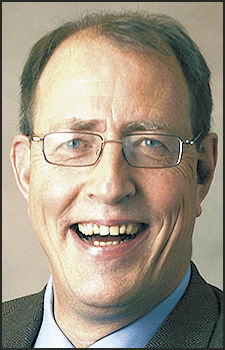 High School:
Attended Pueblo South H.S., graduating in 1973...Served as the manager for the Colts football, basketball and baseball teams for three seasons (1971-73).

College:
Went to Western State College (WSC) in Gunnison, CO and graduated with a Business Administration degree in 1979...Played one year (1979) of intramural football at WSC.

His Story:
Traylor was born with Cerebral Palsy...Has controlled his limitations through his Positive Attitude, Optimism, Commitment and Inner-Strength and has been Athletically involved. He went to work for the U.S. Bureau of Public Debt in Parkersburg, West Virginia but that didn’t give him enough satisfaction; however, before leaving he was nominated for Employee of the Year. Left to become an athlete and motivational speaker. Dr. Norman Vincent Peale from his national radio broadcast, "The American Character" said Traylor is building his career as a motivational speaker by becoming a motivational "doer". Dr. Peal devotes a chapter of his book telling Jerry’s story in a chapter entitled "Perseverance". Jerry knows he has to "live his talk", if people are going to be convinced that they too can achieve difficult goals. Since the completion of his run across America, which he did to raise funds for the Trail of New Beginnings Foundation to enhance programs and facilities for the elderly and handicapped. Jerry just wants to make a difference in the world. He believes and demonstrates - "You can do anything you want if you make plans instead of excuses". He inspires his audiences to do the same. .

Occupation:
Worked for the U.S. Treasury Department as well as being a Motivational Speaker and "Doer"