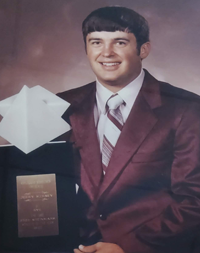 Before High School:
Kersey competed in the Bambino World Series in 1974.

Achievements:
High School:
● Four-year starter at quarterback for the Thunderbolts (1976-79); won 67 of 74 games.
● Averaged 5.1 yards per carry and over 100 yards per game.
● Named All-Conference First Team and the Most Valuable Player at quarterback four consecutive years.
● Made three state tournament appearances (football) and was selected to the All-State team three years.
● Starting point guard on the basketball team for four years (1977-80); won 71 of  85 games.
● Averaged 21 points, five steals and seven assists a game during his senior year.
● Named the team MVP of the basketball team four consecutive seasons (1977-80).
● Four-time member of the All-Conference basketball team, earned three All-State distinctions, helped Rye H.S., to three state tournament appearances.
● Selected to the the All-State team two years and played in the All-State basketball game at the end of his senior season.
● State qualifier on the Thunderbolts track team as a sprinter, competing in the 100, 200, 400 yard dashes for four years (1977-80).
● State placer for four years in the 100 and 200 yard dashes.
● State qualifier and placer in the long jump and member of 800 relay team.

College:
● Played point guard his freshman year of college at West Texas State in Canyon, Texas (1981).
● Transferred to Frank Phillips Junior College in Dalhart, Texas, and played two seasons and earned All-Conference honors (1983-84).
● Returned to Colorado and played point guard for a season (1984-85) for the Indians at Adams State College in Alamosa, Colorado.

Honors:
● Received the "Fred Steinmark Award" as the top High School student athlete in the State of Colorado in 1980 as a senior at Rye H.S. - The Steinmark Award is the highest student/athlete award that is possible to win in the State of Colorado in all classes. It is awarded to the top student/athlete based on character, citizenship, leadership, athletic and academic accomplishments.
● Awarded the "Brian Macartney Award" by the Greater Pueblo Sports Association (GPSA) to the Outstanding Male High School athlete in Pueblo County (1980).
● Bestowed the "Pete J. Carver Memorial Award” as the top student athlete at Rye H.S. - It is the Schools' most prestigious award.

Personal:
Lived in Pueblo West, Colorado with his wife Wendy... He succumbed to cancer on September 21, 2005 at age 43.