Hoy Frakes remembered as one of Pueblo's great sports leaders

Hoy Frakes was considered Pueblo’s sports almanac. To steal a phrase from a former Chieftain sports writer: If you were an athlete in Pueblo, he knew you. And if you excelled, he knew ALL about you.

Frakes passed away Monday. He was 88.

In a story in the Pueblo Chieftain in 2014, sports writer Larry Lopez wrote this about Frakes: A meticulous record keeper, Frakes has reams of statistics and bio information on practically every Pueblo athlete who ever has made a name for themselves on the sports field. And, he can talk endlessly about their history. Give him a name, any name of a past Pueblo athlete. If he doesn’t have the details of accomplishment in his memory bank, he certainly will have it logged into those books that Frakes keeps on all potentially future GPSA hall of famers. State champions. Record holders. Conference titlists. They’re all there. 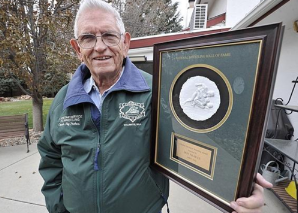 A Greeley High School graduate in 1950, Frakes was a five-time letter winner, twice in football and wrestling and once in baseball.

He went on to attend Colorado State College in Greeley where he was a two-sport standout in football and wrestling. He was a guard/linebacker on the football team, lettering three times and was the only freshman to play on both offense and defense.

Frakes became the first four-time Rocky Mountain Athletic Conference wrestling champion, twice at heavyweight and one each at 177 pounds and 191 pounds.

He went on to get a Master’s degree from Adams State College in Alamosa.

Lopez went on to write about Frakes’ career: Following a two-year stint in the U.S. Army, Frakes immediately embarked on his illustrious coaching career. Actually, he still was serving duty overseas in Italy when Frakes was offered the wrestling job at then-Adams State College. Upon his arrival in Alamosa, though, he found that he needed to breathe life into the program, which the previous year had only two dual matches.

He is considered the father of the Adams State wrestling program. “I had to start it with no scholarships and, I couldn’t talk wrestling until the football season was over,” Frakes remembered. “I lined up my PE (physical education) classes and told them I’d give them an “A” in PE if they’d go out for wrestling and they wouldn’t have to go to class ... But, they had to attend (wrestling) practice.”

Building from the ground up, Frakes compiled a 12-27-1 record and had two wrestlers compete in the NCAA Division I national tournament in the three years he was at Adams State. A coaching changeover in the Adams State football program, where he also was the line coach, left Frakes without a job in 1960. He wasn’t unemployed long.

Along the way, Frakes helped stage the first college match held in Pueblo (Western State vs. Colorado University in 1964) and an exhibition match against a Japanese all-star team (1968).

He also was the Bulldogs’ football offensive line coach for 10 years. While he stepped down as a coach in 1974, his involvement in Pueblo athletics didn’t stop there. He was inducted into the GPSA Hall of Fame in 1981 and in 1996 was elected president of the group.

Frakes was an award-winning insurance agent for 32 years with Franklin Life.