It didn't take long for Colorado State University-Pueblo's wrestling program to stake a claim in the Rocky Mountain Athletic Conference.

CSU-Pueblo, or University of Southern Colorado as it was known at the time, established its wrestling program in 1982.

Coach Doug Moses took the reins from the outset and sought to build it into a contender in the RMAC. That took just two seasons.

The Greater Pueblo Sports Association will honor Moses' 1984 team with a Great Moment in Pueblo Sports nod for their work during their annual ceremony in November. 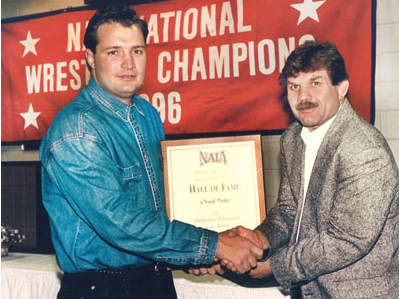 "The RMAC is always tough," Moses said. "We had some really solid guys on that team."

Adams State captured the previous 11 RMAC titles before USC stopped their reign atop the league.

Three wrestlers from that USC team earned conference titles that season as well.

Success came swiftly for USC. In regards to its champions, though, recruiting them required a bit of serendipity.

Hawkins, who lived in Louisiana during his prep years, was at a junior college in Arizona.

Hawkins never had a whiff of Pueblo in his life. But Moses pursued him anyway.

Moses called a fellow coach at Hawkins' JUCO, who put him in touch with Hawkins.

Moses waited a while and still heard nothing from Hawkins. Moses then decided to call Hawkins in Louisiana.

"I got a hold of his brother and his brother said he was on his way to Colorado," Moses said. "I was a little surprised because he never made a visit or anything."

It was sheer luck.

It was another stroke of luck that Moses recruited Guenther. Moses ran into him at a 7-11 in Colorado Springs while shopping for milk.

He learned Guenther wasn't in school at the time, and that's when Moses began his pitch.

"I started talking to him and he said he wasn't going to school," Moses said. "I told him he should think about coming to Southern. We had our program going and it'd be great for him."

USC remained competitive with Moses at the helm but, in 2001, the program disbanded.

It was reassembled in 2008, when current coach Dax Charles, who wrestled for Moses in the 1990s, became head coach.

"Mo was an intense coach, a great technician, great motivator," Charles said. "He had a really strong character and was big in my life at that time."

The ThunderWolves won another RMAC title in 2017, their third overall and first since 1988, and finished as runners-up this season.

Charles said he uses the same workout programs, philosophies and expectations from his days as a wrestler.

Most notably, Charles makes sure he and his current wrestlers have the number one trait he learned from Moses.

"Never quit," Charles said. "Everything I know is from Mo and how he taught and how he coached."

He's accumulated copious memories from the road and competition.

His most recent occurred Friday, when the RMAC inducted him into the Hall of Fame in Colorado Springs.

He may never lose the desire to coach.

"It just gets in your blood," Moses said. "I've been in wrestling practically my entire life. I started wrestling in junior high and wrestled a lot after college. … Then I went into coaching. I'm a wrestling guy. That's what I am, and that's what I always will be. "