The 2022 Greater Pueblo Sports Association hosted its 50th Hall of Fame induction ceremony Wednesday night at the Occhiato Ball Room on the campus of CSU-Pueblo. This year's inductees included some great names in Pueblo history.

Also included in the night's festivities were the awarding of the Outstanding High School Athletes (Brian Macartney Awards), the Sollie Raso Award, and the CSU-Pueblo Outstanding Athletes. The ceremony also recognized three of the greatest moments in the past 50 years of Pueblo sports history.

The inductees for this 2022 Hall of Fame Class include an all-world wrestling coach and a former big leaguer for the Cincinnati Reds.

Here are this year’s inductees, in no particular order: 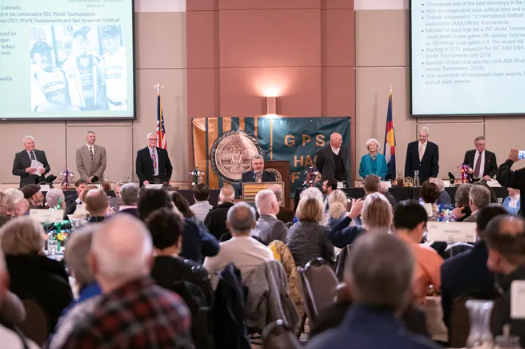 The CSU-Pueblo Outstanding Athletes award winners were Kansas Watts on the girls basketball team and Ty Lewis on the baseball team.

The two winners of the high school awards were thrilled to be a part of this historic night and spoke on what it means to win this award.

“It shows me that all my hard work paid off,” Freeman said. “Hearing my accomplishments, I never really looked back and saw all the things I did. But hearing someone else tell me all the stuff is pretty amazing. It just makes me kind of feel like it wasn't for nothing.”

Martinez was especially happy to win this award and spoke about what it means to her. Xavier Freeman, left, and Leyah Martinez pose with their Brian Macartney Outstanding High School Athlete Awards at the Greater Pueblo Sports Association Hall of Fame banquet on Wednesday. [Zachary Allen/The Pueblo Chieftain]“It really is special,” Martinez said. “I’m representing more than just myself as a person, I am representing a community of people who want to keep this sports association going, and so just bringing the youth into it is an honor, and I'm very grateful.” 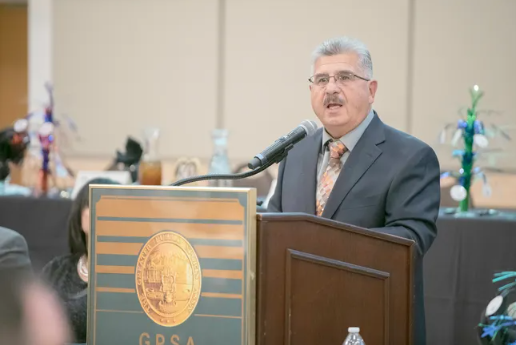 Greater Pueblo Sports Association President Jerry Sisneros delivers a welcome address to start the 50th anniversary Hall of Fame induciton banquet on Wednesday. [Zachary Allen/The Pueblo Chieftain]Finally, the great moments in Pueblo sports history over the last 50 years were honored at this event. These events include Jerry Kersey winning the Steinmark Award in 1980, Mike Zaremba winning the 1980 Colorado Open with a birdie on the final hole, and the Pueblo County High School wrestling team winning back-to-back Colorado State wrestling championships in 2016 and 2017.

Greater Pueblo Sports Association President Jerry Sisneros delivers a welcome address to start the 50th anniversary Hall of Fame induction banquet on Wednesday.
Jerry Sisneros, the president of the GPSA, who was a big player in putting this event together, was pleased with the turnout and the outcome of the evening’s events.

“It was a great evening overall, Sisneros said. “All of the inductees were great, and it was a great night for the 50th anniversary of the Greater Pueblo Sports Association.”