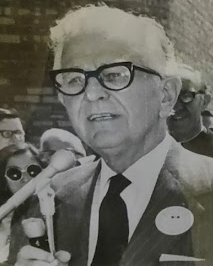 Achievements:
High School:
● Competed on the track team specializing in the sprints and hurdles.
● Posted the best H.S. times: 10.1 seconds in winning the 100 yard dash, 17.3 seconds in the 120 high hurdles and adding a time of 25.0 seconds in the 220 yard dash at the South-Central League meet.

Achievements:
College:
● Won two events at the RMC meet in 1926: the high hurdles (15.1 seconds) and the 220 low hurdles (24.1 seconds).
● Went up against three of the best hurdlers in the world in F. Morgan Taylor, the defending National AAU Champion, Ken Grumbles, National Collegiate Champion of Southern California and Bob Maxwell while competing in the National AAU Meet (1929).
● "Won" comfortable in front of Taylor in 54.3 in the 440 hurdles.
● Named Track All-American in 1929 and declared one of the Best Hurdlers in the World.