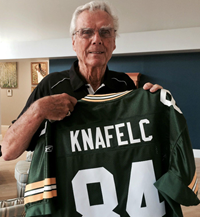 College:
Attended the University of Colorado, where he graduated in 1954.

Achievements:
Professional Football:
● Drafted in 1954 in the second round by Chicago Cardinals and released because of a severe hamstring injury.
● Picked up by the Green Bay Packers where he played for eight seasons (1955-62).
● Appeared in four Western Conference Championships and three World Championship games.
● Played on the World Championship Green Bay Packers Team in 1961 and 1962.
● The only player on the Packers team, to be carried off the City Stadium (or Lambeau Field) by fans after catching a pass from Tobin Rote in the final minute to beat Detroit 20-17 in the 1955 opener.
● Finished career as the Packers’ eighth on all-time receiving list.
● Played final season (1963) as a tight end with the San Francisco 49ers.

Occupation:
● Professional football player.
● Served as the pubic address announcer at all the home games of the Green Bay Packers for the last 40+ years.
● An officer in three corporations in Green Bay.

Personal:
Lives in Green Bay, Wisconsin with his wife, Emily.

Photo of Knaflec courtesy of the Orlando Sentinel.