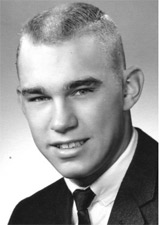 Achievements:
● Played on the 1961 State Championship football team as a sophomore.
● Selected to The Denver Post State High School football team and played in the North/South All-Star Football game (1964).
● Member of the Wildcats basketball team that won the Conference Championship and finished second in the State Basketball tournament (1964).
● Set the City pole vault record in 1964 with a jump of 13' 10", a record stood for more than 10 years.
● Placed second at the State Track and Field Championships in the pole vault (1964).
● Selected as Central High School "Outstanding Athlete" as a nine-time varsity letterman (1964).

College:
Attended the Colorado School of Mines (CSM)... Graduated with a degree in Metallurgical Engineering (1969)...Two year varsity letterman (1964-65) on the Orediggers football (Defensive End/ Line Backer/Tight End)...Four-year varsity letterman in both indoor (1964-1968) and outdoor (1965-1969) track and field...Participated in the pole vault and javelin during the outdoor season.

Contributions:
Achieved the rank of Eagle Scout in 1961...Member of Centrals Key Club (1963-64)...Member of the 1964 National Athletic Scholarship Society and graduated academically in the Top 25 of the Class of 1964.

Related Activities:
● Gehlhoff is an active golfer with a 4 handicap.
● He is a volunteer instructor with the 1st Tee Program in Jackson, TN.
● Active with Youth Mentoring Program and part of a team that cleans up and repairs homes for the elderly.

Personal:
Lives in Jackson, TN with his wife Ann...Gary is a choir member for Hand Bell Choir, a member of his church repair team as well as a Special Church Education Team Member.

GPSA "G" By The Numbers