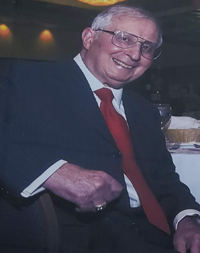 College:
Went to Pueblo Junior College (PJC) for a year...Played one season of football for PJC as a half-back (1951-52).

Contributions:
● Contributor to Pueblo Centennial, Pueblo East high schools, along with CSU-Pueblo and the City of Pueblo since 1960.
● Involved with establishing the Centennial Foundation and in the Funding of the School Achievement and Athletic Hall of Fame.
● DeRose has provided shoes, equipment, and dental work for students who cannot afford everyday necessities.
● Provided above and beyond to the Junior College and University.
● Eddie has made many donations to non-profit organizations in the city have gone anonymous for personal reasons.
● President and Trustee, Edward J. DeRose Profit Sharing Trust since 1980.
● President, DeRose - Padula Enterprises since 1985.
● Chairman, Continuity Group L.L.C. and Longbride L.L.C. since 1990.
● Worked with Western Standard Services Company, Denver, CO since 1990.
● He has also been the Treasurer, Small Smiles Dentistry for Children since 1996.
● DeRose has been on the Board of Directors, First National Bank - CO since 1999.