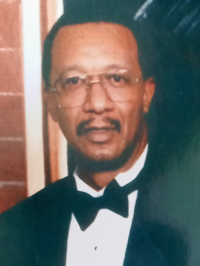 College:
Smith went onto earn a bachelor of science degree in business management at Kansas State Unversity and played basketball for the Wildcats.

Contributions:
Listed in the Who's Who Among Black Americans. Received "Outstanding Young Man in America," and "Man of Distinction" awards. Recognized, along with Terry Snider and Ron Smith, for their era being one of the "Great Moments" in Pueblo sports history by the GPSA in 2010.

After graduating in 1971 from Kansas State with a bachelor of science in business management, Smith began a long and distinguished public service career in city government attaining the position of Deputy County Administrator for the Unified Government of Wyandotte County, Kansas City, Kansas. He joined the Kansas City government in 1972, and by 1974, he was Coordinator of the Manpower Services Planning Department. He then headed numerous offices, serving as Director of Community Development, Neighborhood Preservation and Housing departments.

In 1999, Smith was named Administrative Support Director for the consolidated government of Wyandotte County and Kansas City. He managed the clerk's and appraiser's offices, human resources and logistics departments, and the historical museum. Smith served on a number of civic and professional boards, as well as, being consultant for the National Conference of Mayors, and the Community Development Training Institute, which designed training programs in public-private partnerships for city governments across the country. Smith's professional career spanned 30 years.

GPSA "S" By The Numbers