High School:
Attended Pueblo Centennial H.S., graduating in 1963...Lettered and played three years each on the football (QB and RB), wrestling (120 lbs) and baseball (shortstop) for the Bulldogs. 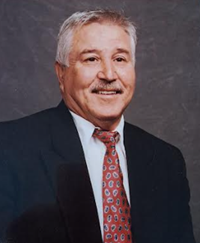 College:
● Earned a Bachelor of Arts deegree University of Southern Colorado - Pueblo (1968).
● Attended Adams State College and graduated with a Master in Arts (1974).
● Attended University of Colorado for 15 semester hours in Guidance & Counseling (1973-74).

Contributions:
Madrid was a volunteer soccer coach at Centennial and The Pueblo Ranger's Teams during the years his son and daughter were members of the teams...Corky designed, purchased & developed Soccer Trophies that are presented at four crosstown rivalry games and he purchases and presents individual medals to the winning teams... Don gave advice, assistance and  led fundraising efforts on many projects involving other Pueblo School Foundations and Hall of Fame committees...Centennial H S Foundation Board VP for three years (involved in meetings, fundraising, painting bricks and marble slabs, and coordinating all the events and committees); President 20+ years...Madrid has served on the Construction, Courtyard and Reunion Committees...Sangre de Cristo Art & Conference Center Board Member.

Personal Affiliations:
● Corky developed and patented a therapeutic treatment program which has been used nationally, and includes US military.

Personal:
A Pueblo native for 58 years, Corky is married to his wife, Jusitne.