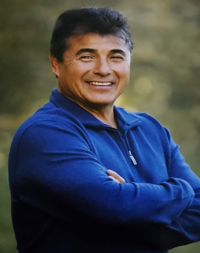 Prior to High School:
● Started wrestling at 14 years old at the Boys and Girls Club under the guidance of coach Jack Scammahorn.
● Youth State Wrestling Champion (1973).

Achievements:
High School:
● He was the Wildcats first four-year letterman, wrestling all four years on the varsity squad.
● Boys and Girls Club coach Jack Scammahorn coached him for three years before Fred Rodriquez took over during his senior year.
● State qualifier during his junior and senior seasons.
● He finished his career placing fourth in the state as a senior.

Achievements:
College:
He helped the Indians to three NAIA Team National Championships and one-year runner up under coach Richard Ulrich.

Coaching Career:
● While going to college at ASC (1977),  coached eight seasons (until 2005) at the Pueblo Original Wrestling Association (POWA) under President Mr. Rice, John Mooring and Cody Wilson.
● Coached kids of all ages and abilities in the fundamental rules of wrestling.
● He taught freestyle, greco and folkstyle wrestling.
● Also coached for five seasons at Pueblo South High School (1980-85) and Fowler High School (1995-2000).

Personal:
Born in Rocky Ford, CO in 1958...He has been a residence of Pueblo for over 50 years with his wife Anna.