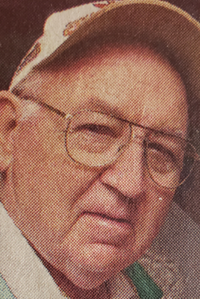 College:
Attended Pueblo Junior College from 1948-1950 earning an A.A. degree before going to Adams State College in Alamosa, CO where he graduated in 1952....Continued his post-graduate studies at Western State College in Gunnison, CO, and graduating in 1960.

Contributions:
● Spent 30 years as a teacher, coach and administrator for School District #60.
● Begin his teaching career as a classroom, P.E. and Group Guidance Teacher from 1953-62.
● Moved into administration at Pueblo East H.S. as the school's Activities Director for two years (1968-70), before becoming an Assistant Principal for the next five years (1970-75).
● Moved on to Pitts Middle School and Roncalli Middle School (1976-78) to serve as in the capacity of Assistant Principal.
● Served as the president for football, basketball and baseball umpire study groups.

Achievements:
● Coached Junior High School - Football, Basketball, Track as well as handling the duties of Old Timers Baseball and working as its coordinator.
● Ran the Pueblo Softball League.
● Director of the Babe Ruth State Baseball Tournament.
● The "Key Man" in successful bid for Pueblo to secure the 1976 Babe Ruth Baseball and was appointed as Colorado District #4 Colorado Old Timers Director from 1972-75.
● Also during the same time, held the position as President of the Runyon Field Committee from 1973-1974.
● Elected as the State Old Timers Director for two years (1977-79).

Occupations:
● Owner of  David J. Novak Photography.
● Donated pictures of Honorees to the Greater Pueblo Sports Association (GPSA) for many years...Honorees paid nothing for the photograph to go into the Hall of Fame.